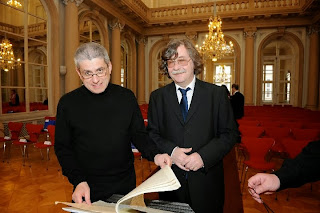 The year was 1974.  Amidst the worst of post-68 normalization two 18-year old music students met at the admission test for the University of Arts in Bratislava. They both wanted to study composition. They both were admitted. But something else also happened on that day - a lifelong friendship between Vlado Godar and myself started.

We entered the school together,  we went through it together, we both got married on the same day and I don't think I've ever met a person with whom I'd have an understanding as complete as with him. He would know what was going on, when (yes, many years ago) a telegram was delivered by phone to his flabbergasted father, who could not understand, why the Karamazov brothers would ask him to pickle the oranges in casks . Yes, I sent it, and Vlado knew immediately.

To this day we are able to communicate in our own shorthand language. Rarely is any explanation necessary and most of the time an unfinished sentence stands for many descriptive words. Despite the fact that we've been living on different continents for over 20 years now, the connection is as strong as ever and whenever we meet, even after many months, we just continue our conversation as if we met for the last time just yesterday.

His knowledge and understanding of many areas is extraordinary. Between all his work, teaching, raising children, taking care of the household and other related tasks, he always manages to be entirely up to date with music, whether classical, world or pop, literature, both fiction and vocational, movies, politics, historical research... you name it. The stream of incoming recommendations of things I should read, hear and see is incredibly vast and virtually endless. I am unable even to follow everything that comes my way from him, while he already included all the ramifications in his latest writing.

My fascination with Vlado never ceases. The capacity of his brain and its ability to find the most unbelievable and yet strongly logical connections and associations is incredible. If there ever was a polymath, a Renaissance man, it must be him.

I can imagine the pleasure of being his student. He doesn't just teach the subject, his discourses always come with the entire context, unexpected yet crucially important connections and associations and on top of all that, a spirited and humorous delivery.

I know his musical output quite well, having even performed a few of his pieces. It was always a creative adventure and a pure physical pleasure, because his music is both incredibly well crafted and beautiful.

I can't even remember all the occasions when Vlado inspired me and gave me new ideas for my work. Despite him not being a practical man at all - he does not drive and I don't think he would be capable of any manual labor [there is a famous story how at the hardware store the salesman refused to sell Vlado a chain saw just from looking at him] - he is an incredible organizer and an inspiring force to anybody who has the luck to collaborate with him.

It was during our university times when he started suggesting, and later insisting, that I should be playing jazz piano more seriously. Luckily enough I listened then, and every time later, whether it was a suggestion of a possible musical partner, or an opportunity to present a piece I wrote. He was quite instrumental for several key performances of my life and did all this very unselfishly. Needles to say, I was not the only one to enjoy the stream of Vlado's ideas, suggestions and causal chains.

Vlado has an unbelievable eye and ear for discovering extremely talented musicians. Besides discovering, he feels the responsibility to help them to kick start their careers and he organized an uncountable number of concerts, giving opportunities to many beginning musicians. In the same way he discovers forgotten or neglected composers from the past and helps to re-create and revive their compositions in order to present them to public.

The service he did to preserving important composers of Slovak and European music history and their output is immense, and so far totally underappreciated.

As a conductor performing contemporary music quite extensively, I really cherish Vlado as a composer, because he always strives to make his music accessible, but before anything else, beautiful. No matter what the subject is, whether it is a very serious piece, bringing up themes that determine history and societal changes or if it is just a short musical joke, the music always maintains its most important attribute - beauty. At the same time, the highest level possible of musical craft he operates with is crystal clear. I have to stress this, because these qualities are seldom found in most contemporary pieces.

As long as I can remember, we shared the same opinion about what music should bring to people and how it should  be done. Within the ivory confines of today's academia, despite the proven fact that audiences are quite uninterested in it, our colleagues firmly rooted in Darmstadt/Adorno tried to ignore, ostracize, boycott and harm Vlado uncountable times.  Instead of appreciating his qualities, his colleagues, whether composers, writers or teachers tried very hard to exclude him from their institutions. However, Vlado's work and music makes most of the inrigues disappear.

The world,  and his audiences especially recognized the quality and the deep humanity of Vlado's music and its message. His music stands firmly on the shoulders of history, yet it is innovative and unusual. It is often connected to the best works of literature throughout human history - from folk poetry (whether Slovak or African), to the works of great Slovak, Chinese and other poets, through the most important texts like Gilgamesh, Jan Amos Komensky, Erasmus of Rotterdam, James Joyce, Skhlovsky or Chiladze to mention just a few.

Vlado refuses to create music aimed at a pseudo intellectual crowd, such as those who pretend to fall into a false trance over three minutes of silence, or those who are excited by three hours of a repeated five notes, even when such music is put on a pedestal by dumbed-down media and critics living in constant fear of being exposed as promoters of the emperor's new clothes. He always knew that it is of utmost necessity and a matter of artist's responsibility to carry the torch of tradition, to stress and highlight the focal points in human history and to strive for peace, love, beauty and understanding.

The same goes for his writing as a scientist and historian. His ability to find and connect points in the history of the human race that are not only invisible, but often completely unknown to most of us, is uncanny. By doing that, Vlado is able to arrive at new and rightly generalizing conclusions, which are often quite surprising, but always completely relevant. They help the rest of us to understand, at least partially, the message that the quest for finding sense in human existence is still important, even if we probably won't ever get a lucid answer from it. And his music somehow lets us feel that all of a sudden, everything, at least for a fleeting moment, makes complete sense indeed.